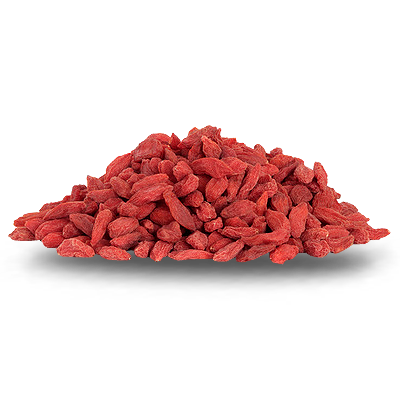 In China and Tibet, the Goji berry is called "Happy Fruit". Residents there are firmly convinced that those who eat the Goji berry, puts people in a state of great satisfaction. Therefore, you hold in honor of the berry from even a year different parties, to thank for their health benefits. It is believed that the human gift of energy, strength and endurance, but also durability and beauty. She remembers the taste of a mixture of cherries and cranberries and there is an important part of Chinese cuisine and medicine. In America is the anti-aging agents, the juice of the Goji berry, as the drug of choice. The Goji berry, also known as wolfberry, is a small red berry with a very amazing effect. In China it is for the people an eternal fountain of youth dar. In Tibet, one goes even a step further and said to the little berry even secret forces and energies. Overall, it is for the people a precious gift of nature.

Her fame spread in all parts of the world, but especially in the Himalayas, Tibet, Asia, Europe, Australia and America, the enthusiasm of the Goji berry is most pronounced. According to ancient Asian traditions and the conviction of connoisseurs of today, are to guarantee the regular consumption for a vigorous and happy life. The Goji berries are said to be the most nutritious plant on the planet. It was also shown that in the regions where goji growing and is also used, the number of the 100 year's 16 times higher than in other regions.

In researching the Goji berry has been shown that the goji fruit has a high proportion of essential amino acids, proteins and trace elements. They also contain high amounts of vitamins and vital substances effective. But it is not the physical health but it is also the "balm for the soul." This has earned her the affectionate nickname "Happy Berry". After the conviction of the Goji berry is said also aphrodisirende effect, therefore, in connection with Goji promised not only a spirited life, but also the increased formation of new life.

The rather modest plant grows when it gets enough sun, under simple conditions. However, they do not tolerate heavy metals or salty soil. This fact is responsible for ensuring that the plant grows more in wild areas and far from the coasts. After harvesting the berries, they are dried in the sun to prevent the loss of nutrients largely. The so-dried fruits, both raw as can be eaten cooked. Similarly, the cranberries, they taste about as sweet as goji berries, they can be eaten in cereal or vegetables, or snacks in the evening, it is clear that it represents a powerful complement to traditional and healthy food.