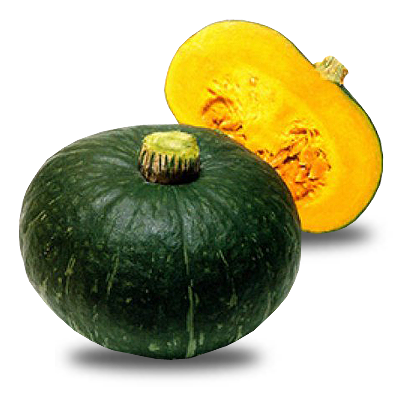 Kabocha squash (pronounced kuh-boh-cha) is a hard winter squash available from late fall to late spring. Its hard, dull, bumpy dark green shell is marked with pale celery green striations. It's rather heavy for its size (usually 2-3 pounds) and has a stumpy grayish colored stalk. Kabocha squash has a brilliant yellow-orange flesh, like a pumpkin's. Both the texture and flavor of Kabocha squash is similar to a sweet potato: the soft, moist, fluffy flesh is surprisingly sweet and slightly nutty.
Kabocha squash is a centuries-old variety of Japanese squash that in Japan is often referred to as a Japanese pumpkin. Apparently it was brought to Japan from Cambodia by the Spanish in the 1500s and is used in dishes ranging from soup to sushi.
As its rich orange flesh indicates, Kabocha squash is high in beta carotene, a powerful health-promoting antioxidant. An abundance of beta carotene, the precursor to vitamin A, is kabocha's prime nutrient, along with vitamin C, iron and potassium. Also present are folic acid, calcium, and trace B vitamins. Kabocha squash is so naturally delicious, that you could eat it simply roasted and unadorned.
#244124
Back to top