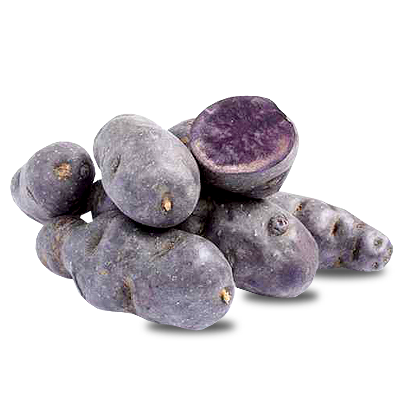 Description
The potato plant is a family member of the nightshades. The potato is native to Peru. The plant however is grown for its, equally named, roots. Each plant grows about 8 till 12 roots. There are many varieties of potato plants. The well known potatoes are brown to yellow coloured, but potatoes can also be orange, red or even purple. Not only the color differs, but also the taste and texture. The skin of every potato is edible.

Preparation
Clean or peel the skin. Then the potato should be fried, boiled or baked except for the crosne potato. Crosne potatoes can be eaten raw.

Consumption
Potatoes can be eaten raw, but this is generally not done. The waxy potatoes are perfect for dishes where the potato should be intact, like stews and soups. However every potato is easily made into purée, French fries or chips. A well known potato dish is the Spanish Omelet.

When to eat
Keep potatoes at a cool and dry place.